The time honored practice of hand weaving offers women a path out of poverty and enables them to preserve their cultural heritage. Since independence in 2002, initiatives have focused on improving the economic viability of hand-woven cloth but little is known about the impact of weaving on women’s health and how their health impacts on their work. As women need a decent income to maintain good health and good health is needed to maintain a decent income, the Weaving Women’s Health research project explored this reciprocal relationship and generated foundational knowledge to improve the quality of life for hand weavers in Timor-Leste. 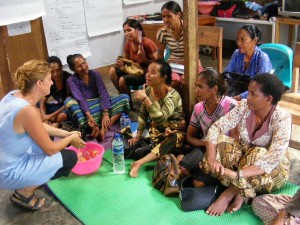 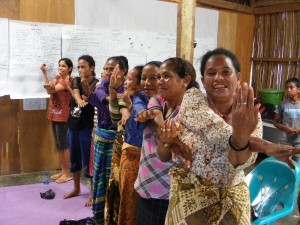 Originally, this study was to involve a broader range of weaving groups however due to funding restraints and changing political contexts in Timor-Leste, the study was undertaken with weavers involved with the Cooperative for Tais and Cultural Development (CTKDS – now known as Cooperative LO’UD). LO’UD is ETWA’s key partner and is located in the Lautem district. The study was undertaken in June 2009 before ETWA’s weaving tour and observations and follow-up were undertaken during the weaving tour in July.

The study will provided members with a forum to articulate their health concerns, discuss aspects of weaving that may contribute to ill-health and involved the women in developing interventions aimed at improving their well-being. Findings reflect the working conditions and health of weavers in other locations in East Timor and will be relevant to a number of organisations working in this field.