LO’UD members belong to one of three weaving groups located in three individual communities. Most women are from the Iliomar sub-district and so have family and working relationships with members of other groups. However each group functions as an independent entity, managing both production and internal relationships locally but with the assistance and guidance from both the LO’UD team in Los Palos and ETWA volunteers in Australia.

The Los Palos sub-district is the capital of the Lautem district, ten hours by bus from the national capital of Dili. The uncultivated flatlands surrounding Los Palos are known as ‘dead earth’ due to extensive deforestation during the occupation. The Lospalos weaving group is located in Fuiloro village, the most populace of the all the villages in Lautem with a population of 16,803 (Census, 2010). It is home to the district hospital, a sizeable market and many large shops, high schools and clinics, central branches of numerous churches, hotels and many small industries.

A small bus shelter is the marker for the windy and furrowed 2km road into Fuat Village. Fuat is one of the smallest of six villages in the Iliomar sub-district with a population of 887 people (Census 2010). Incredibly picturesque, the village sits atop a grassy, wind-swept mountain plateau overlooking the Timor Sea. Traditional thatch houses and more modern concrete houses are built around the sports field in the center of the village. One meandering street off the main road leads down into lush forests and the location of the Suco Antigo (old village), where residents lived before the Indonesian military relocated the village to the mountain top during the occupation. During the wet season, Fuat gets quite cool. 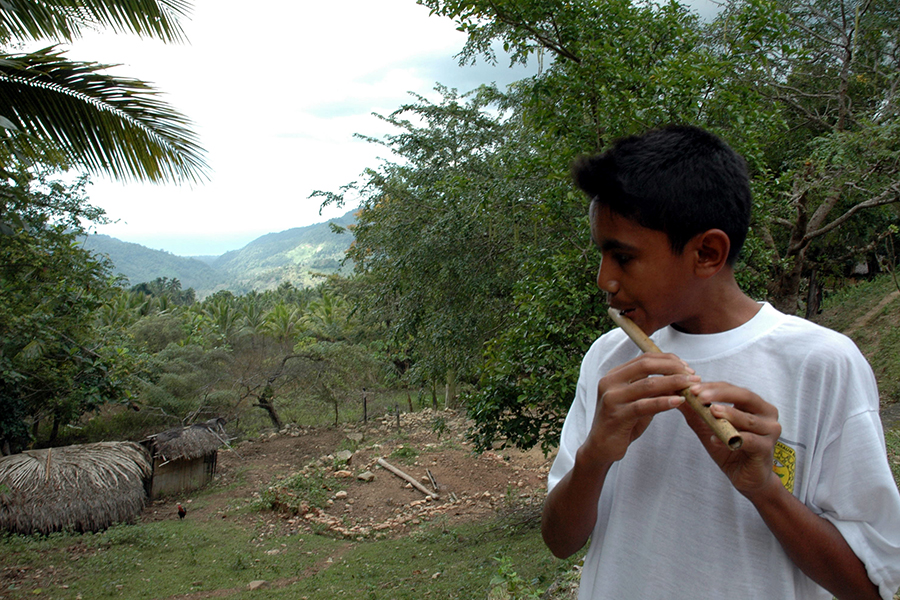 The larger village of Caenlio is located on a hillside, with traditional and contemporary houses sequentially scattered on cobbled streets amidst tall eucalypts and coconut trees. Steep meandering streets lead from the centre of the village to the school, to the river, to farmlands and to the monkey forest over one of the wider rivers in the village. With a population of 1273 (Census 2010), Caenlio is one of the larger villages in the area with its own guest house and many local industries. 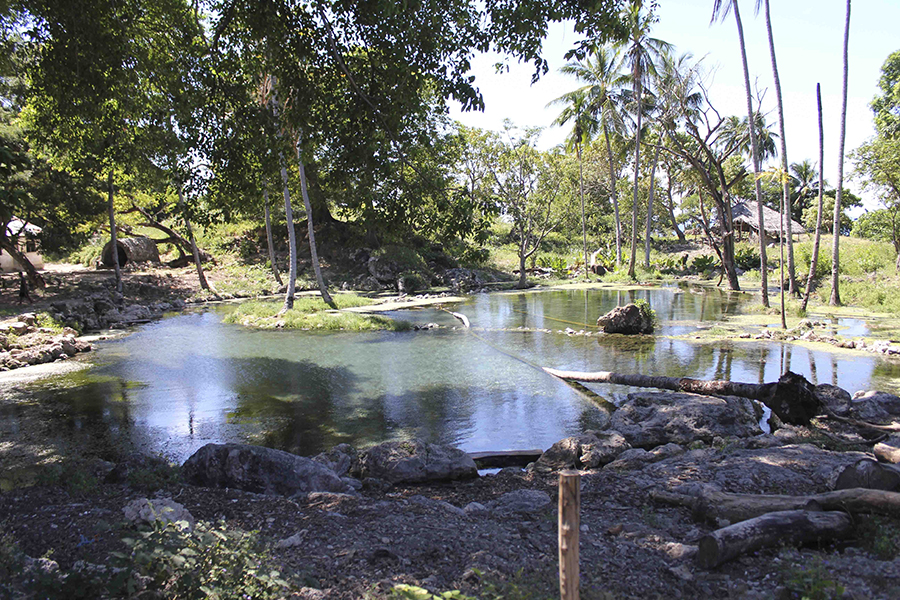 Introducing the Chiefs of each weaving group: 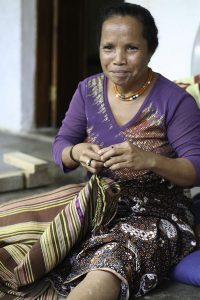 Marcelina Pinto is the Xefe (President) of the Feto Kiak Weaving Collective. A strong and sharp-minded woman, Marcelina’s leadership skills were honed in the jungle, where she helped Guerilla fighters stay alive during the twenty-four year war for Independence.

Her husband was personal security guard to the resistance hero and Prime Minister, Xanana Gusmao. Marcelina’s their first child was born in the jungle. They have five surviving children. Marcelina is a consistent leader who makes sensible and sound decisions quickly. Under her guidance, her 27 member collective is, unified, active and flourishing.

Viana Pereira was born in the 1950’s when Timor was a province of Portugal and has spent most of her life in Iliomar. She is a warm, light-hearted woman and her two grown-up boys and grandchildren are her treasures. She started weaving when she was 5 years old and soon became one of the youngest and most experienced weavers in her clan. Widowed during the occupation, Viana supported her family by weaving for local and foreign markets. She lives in Caenlio village with her extended family. 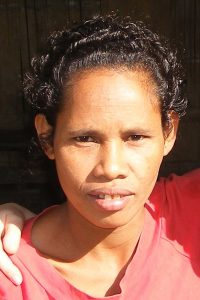 Sabina’s family have always held positions of leadership in their community. Her loving husband served two terms as village Secretary and Sabina as the youth representative on the village Council. Her experience and the mentoring received from her family has heightened her administrative instincts and leadership skills. She was elected as Xefe of the Fuat group in March when the founder, Marcelina Pinto, passed away after a long illness. Sabina brings fresh ideas and a new style of leadership to the group. She lives with her husband and four children in the picturesque village of Fuat, Iliomar.

Celestina Hornay (sitting at the loom) is 36 years old and has to be one of the hardest workers in the Feto Kiak (Poor Women) weaving group. She juggles  numerous responsibilities and four small children (Mickey pictured in the orange t-shirt). She is the Treasurer for the weaving collective, works a small farm and often weaves all night while also managing to teach the art of weaving to her eldest daughter Noi and help Noi do her homework!

Celestia is wonderful company, helping to keep the atmosphere light with her easy going nature and constant teasing. Her nick-name is wali-pasak, meaning cheeky in the local language of Makalero. 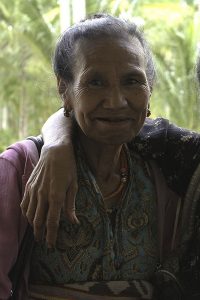 Julia da Costa is a Master Weaver, holding a magnitude of knowledge about the traditions and culture of tais weaving from the Iliomar region of Timor-Leste.

Julia is unsure how old she is but her family thinks she is around 65 years old. A widow, Julia’s only son  recently completed a BA and Julia travelled alone to Indonesia to   attend his graduation. Julia is a respected elder in her community. 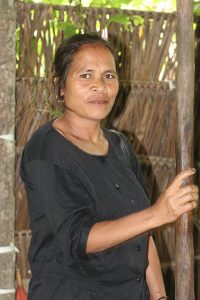 Olimpia da Cruz is relatively new to the art of weaving and is an eager and diligent learner. Some techniques are markedly difficult and many weavers wait until they have mastered the simpler techniques before starting the next phase of their learning journey. Olimpia however likes to learn through trial and  error and the advice of the older weavers in her collective. Although a little costly, she prefers to learn through her mistakes.

Sixty-three years young, Terezina Amaral loves to weave and also loves to dance. Her big family are the perfect match for her big  energy and larger than life personality. Terezina says that playing with her grandchildren and dancing with her children keeps her young. But there’s no playing when it comes time to weave tais. Like most women her age, Terezina can’t read and write but has an extremely important role as the teacher of sacred custom within her family.

Augustina dos Santos was born in August 1989 in the village of Fuat in Iliomar, the home of the resistance movement in the Iliomar region.

She is the second youngest of fifteen children and her elderly parents live with their first-born son in Fuat. Augustina learned to weave from her mother Berta who continues to weave despite her failing vision.

Augustina hides the difficulties of her life behind a gorgeous smile and elegant disposition. Her first child is in need of constant care having suffered from severe malnutrition. She lives with her husband’s family over the mountain in Luro with their second child.

Diligent and strong, Otelia da Conceicao is one of the most accomplished young weavers in the Feto Kiak weaving group.

At only 29 years old, Otilia favors the more complex techniques such as floating weft, known as ‘mel’-meli’ in Otilia’s mother tongue, and ’Pele’, a time  consuming warp wrapping technique most women take years to master, is a favorite of Otilia’s. However it’s a wonder she manages to weave at all as she has four children under the age of five.

Maria da Costa is 45 years old and has eight children. She speaks of her last child (pictured with Maria) as being a miracle baby as Maria thought her child-bearing days were over.

Although she is a shy and reserved woman, like most of the women in the Feto Kiak collective, Maria’s finds the therapeutic qualities of weaving help her cope with her traumatic past. Maria is a hard worker. She has a large garden which is one hour one way by foot from her house. She tends this large garden by hand.

Jacinta da Costa is married and has four children. She has a placid and gentle nature but a fiery passion for traditional tais weaving. Jacinta produces the most  remarkable cloth and her weaving is consistently even and of the highest quality. She has an excellent sense of design and balance, which ensures her cloth is highly sought after for both cultural ceremonies and as collectors pieces.

Despite her relative youth,  Jacinta has a deep understanding of traditional dyeing and weaving techniques and  applies this knowledge with expertise that equal the Master weavers of old. 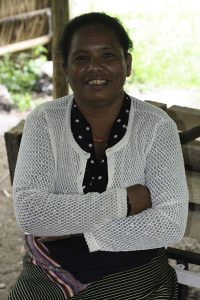 Rosalina Pinto is an active member of the Feto Kiak weaving collective and a highly skilled weaver. She embodies the strength and resilience of Timorese women in her battles with constant health issues. Sadly Rosalina suffers from migraines but she never misses collective meetings or the days that the women come together to weave.

Being part of the group helps her be strong and the income ensures she can afford to buy medicine when her migraines are unbearable.

Julieta is a kind and gentle soul. He incredible skill and dedication as a weaver shows in the perfection of her weavings. With a natural artistic awareness, she is a valued member of the LO’UD Cooperative.

Julieta is a key member in her family with over six children, her commitments are vast and with patience and resilience she achieves all things.